This week’s post was supposed to be about my delicious visit to The Two Cats. However, I experienced some mild peril that I feel I need to talk about. Last week on the way back from the depths of Wolverhampton, I had a small traffic accident. This small accident cost me my car, known endearingly as Flo, who has been my right hand (drive) lady for the past 12 years.

The accident itself was very minor; I bumped into the back of a scrap metal truck. The truck escaped unscathed (it had seen better days anyway) but little Flo suffered a bit of a knock: 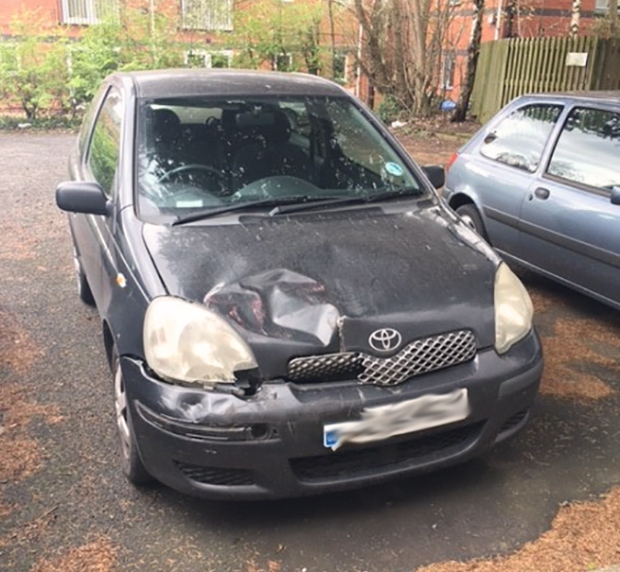 When I returned, I had to face the trauma of calling the insurance company. In my flustered state, I called my old insurance company who were good enough to remind me I renewed my policy with a new insurer and they put me straight through to them. What lovely people (their kindness almost tipped me over the edge). A few phone calls plus 12 hours later, I found out that they decided to write her off. I received the cheque for the damage the morning after. That was it, she was going to get scrapped. I accidentally on purpose avoided calling back the scrappers just so that I could have a few days to process the situation.

This post is probably beginning to sound really boring now, but I do have a point somewhere. Being told that my trusty car is no longer road-worthy brought back a flood of memories; I never really thought I was that attached to her, but I am. Oddly, I’m quite aware of my sentimental attachment to what I call ‘stuff’ that is in my flat (cuddly toys, SO MANY CUDDLY TOYS THAT I DID NOT BUY) but I never realised my attachment to this massive machine that I drive around all the time.

I bought my first car when I was 19; a cute blue Nissan Micra – I was continuing my mother’s legacy of having a Micra as a first car. Jo (as he was called) was… okay. He kinda got me places but I wasn’t really that fussed by him (the same goes for some of my relationships). When I found out that I got a place to do a Masters in Birmingham, I decided I needed a beefier car to support my commute. I remember looking at VWs and I think I even got into a Fiat Punto at one point but there was one small problem – they were all a bit massive. Yes, it turns out that reaching things (pedals) is quite essential when it comes to driving. I was dead against a Yaris, mainly because my dad kept saying I should get one (I do not do anything that my parents suggest) and reluctantly got in one to test drive. I remember thinking ‘Crap. I really like this car (and I can reach the pedals without getting cramp).’ Then pursued a short argument with the salesman about having to pay extra for car mats. CONNIE WAN DOES NOT PAY EXTRA FOR CAR MATS. I won and got cheap alloy wheels too.

The 12 years we’ve spent together has definitely felt like 12 years. She’s moved me to 3 different addresses, had to deal with 4 different commutes, and she’s driven me to the extremities of this island we live on. That time I had to drive after spending a weekend learning to surf was the most painful drive of my life; who knew that putting the gear stick into reverse could be so painful? More recently there was an incident where I pulled/tore my calf muscle at dance class and there was a small chance that I could not drive home. Luckily I could, but made sure a friend was in the car with me in case my calf decided to jack it in during the 5-minute journey.

Not being able to drive Flo feels a bit like breaking a leg. There are loads of possibilities within reach, but I can’t get to them right now. My freedom has been restricted. Trips have been put on hold and errands have had to be postponed until a replacement (no car can replace Flo!) is found.

I did eventually pluck up the courage to call the scrappers; they are booked for Tuesday morning. Whilst I’m a bit excited by the prospect of a new car, it feels more of a burden because Flo, technically, still functions. She just looks a bit worse for wear. That’s probably an analogy for how I’ll end up one day. Brain’s still a-ticking but back and knees a-cricking.