This week has been somewhat unusual in that I had quite a few meals out. Contrary to popular belief, I don’t eat out half as often as I used to/people think I do. This is a bit of a conscious effort to be a bit more ‘responsible’ with my money, and also an opportunity for me to do more experimenting in my own kitchen. This month eating out was a bit of a luxury as I am still bankrupt from buying a new car. However, needs must.

Stop no. 1 was Itihaas on Newhall Street, a Brummy classic. I had been once before and embarrassed myself by asking the waiter if they could add saag to my order. Of course not. You don’t ruin a dish that has been carefully thought through by an excellent chef, by adding bloody spinach. I’m a sucker for lamb curries; tender meat, aromatic spices and a little (or a lot) of heat to round it all off. Rice and bread are both necessary.

I was lucky enough to be dining with friends who like to share their food, so share we did! We ordered Nalli Gosht, ‘Lamb on the bone stewed in a spicy, thick masala gravy’ – everything I love about lamb curries; tender meat on the bone and the surprise bit of heat afterwards! Prawn & Scallop Mustard Seed Curry, ‘Pan seared Scallops & Fresh Water prawns cooked in creamy sauce with mustard seeds’ – but less the scallops because there weren’t any available. A tomatoey sauce that wasn’t particularly creamy but definitely aromatic without overpowering the prawns. Chicken Biryani was next (no description needed, right?!), it came in this ornate silver dish which held enough to feed 2! On top of this we decided to order THE MOST DELICIOUS Mushroom and Truffle Oil Pilau which was full of umami, and an excessively large basket of breads. A wonderful night was had! However, most importantly, Itihaas is part of the Let’s Feed Brum project which aims to encourage local people and businesses to get involved with the rising problem of homelessness in the city. The restaurant is currently looking for donations of clothes, sleeping bags and sanitary products to pass on through their team of dedicated volunteers. Find out more about their challenge here.

Wednesday = Ginner. Well, any day can mean Ginner in my opinion. A catch up with a friend over gin and foods is always the highlight of my week. This week’s Ginner took place at the Lost & Found, one of my favourite places for drinky poos. For some reason I really wanted fish and chips, probably because I was missing my mum’s fried goods? (My mum has gone on holiday, leaving me to cover her shift in the takeaway which is… 2 hours away). The triple-fried chips were a bit unnecessary – once is fine by me. Especially when they’re frozen ones and not fresh ones (yes, I can tell from over 2 decades of training). The fish was coated in a light batter, tartar sauce had a lotta pickles in, which I actually kind of liked.

SO MANY PICKLES IN THAT SAUCE

Thursday night came a bit of spontaneous dining with some wonderful delegates from the Costume, Culture and Dress conference that took place at BCU. Not being able to make the conference itself because of work commitments, it was lovely to take time out to meet the researchers and academics in a more social environment. Dinner was served at Birmingham Museum and Art Gallery which was a winner because we also got to view the Pre-Raphaelite collection out of hours! It brought back so many memories of my early days in Brum – I actually chose to study up here because of that ridiculously-fantastic collection.

Dinner was pleasant with great company, although there was some confusion between the waiting staff about what we were eating… nevermind, it was all yum! Scallop on some lentilly-tomatoey-spicey soup (we were never told what this was!) followed by chicken, gratin and some veg, finished with a rich-so-so-rich chocolate fondant served with pistachio ice cream and… cream. I wish I hadn’t eaten so much of the chicken as I couldn’t finish that dessert *mega sad face*. Well done BMAG for serving actual nice food. 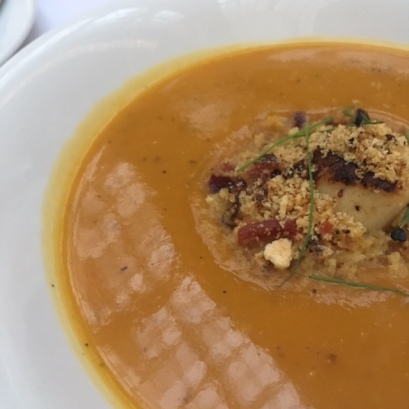 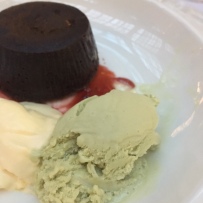 The highlight of my weekend was a catch-up brunch in Bristol with my BFF in the South West (Bestest Foodie Friend). I’ve been heading back the past 2 weeks to help my dad in the takeaway (6-day working week! Noooooo) so I saw it as an opportunity to catch up on some gossips. I always like to try somewhere new and independent where I can – thanks to guidance from my BFF. Low and behold, we discovered Pinkmans. YOU NEED TO GO THERE NOW IF YOU HAVEN’T BEEN ALREADY (scroll down for visual references as to why).

It’s situated on trendy (does anyone use that word anymore?) Park Street which is usually swarming with students. However, the Sunday vibe was a little different; laid back locals on their day off. You walk in and you’re hit in the face with a beautiful display of pastries, cakes, sandwiches, salads… you get my drift? It all looked so wholesome and delectable at the same time. I’ve never drooled over a beetroot salad before.

We were both in brunch-mode so opted for bacon, oven-baked eggs and toast (with a side of avo for me). We were greeted with half a pig, each. I don’t think I’ve ever seen this much good-quality bacon on my plate before. Thick, thick rashers sat next to perfectly-cooked eggs that were not swimming in oil. Eating this made me feel virtuous. On our way out we nabbed ourselves a sour-dough-nut each (cinder toffee, obvs), their in-house speciality. Mine is still sat in it’s box waiting to be eaten for dessert… *stuffs face*

This is how breakfast should look everyday.

LOOK AT THAT BACON. JUST LOOK AT IT.

Little rolls filled with salmon and cucumber on display

SOUR-DOUGH-NUTS OMG. (Front to back: cinder toffee, chocolate, and rhubarb, raspberry and yoghurt)

If you managed to scroll down this far – first of all, well done and secondly – that concludes my week of good eats! Hopefully more to come soon! 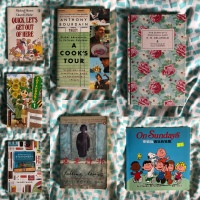